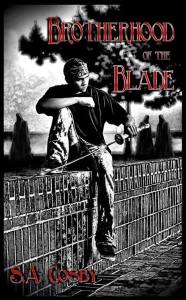 Teenager Catlow Creedence comes from a long line of skilled warriors called the Brotherhood of the Blade, who defend mankind in an epic battle of swords and skill against the evil Men of First Chaos. Decades have passed since the last combat and for Catlow all the portents and omens seem like the echoes of an old and outdated religion rather than the harbinger of the return of the Judges, shadowy figures who serve to invite combatants to the approaching bloodshed and who rule over its outcome.

As both sides prepare for the battle by assessing their allies and attempting to thin the ranks of their adversaries, Catlow finds himself both at odds with his stern, devout father, Pretlow, and with the assassins sent by the Men of First Chaos to guarantee that the Creedence line does not survive long enough to enter the battle. Father and son must work together to assure their family’s safety as dark forces gather around them from all ends of the earth.

An extremely impressive first novel! Shawn Cosby sure knows his way around a sword fight. His battle scenes bring to mind classic martial arts films like 7 Grandmasters, except everyone is equipped with a family heirloom quality blade for extra serious slayage. Gritty and raunchy, this is NOT your little brother’s Urban Fantasy, even though there is enough  for a fantasy novel (the Judges’ summons appear in a mysterious black box) and enough clever martial arts (the battles against the Men of First Chaos defy the laws of gravity and physics), this story is grounded in very real danger, bloodshed and other adult themes. Namely the theme of sex and the theme of drugs. These two combine to make for a PG-13 through R rated novel.

Although I think the book would have benefited from one final editing run through as there are strange double periods that should have been picked up by the editor, the story Mr. Cosby weaves is well worth looking past that small distraction. His characters, from the amazingly upstanding and uptight Pretlow to the sleazy drug addled Carcine to the terrifyingly carnal Vivian, have believable back stories and are detailed with care. The various swords and armaments are described in a manner that allows the reader to fully appreciate a particular fighting style. The scenes involving assassins sent to ‘take out’ individual clans are choreographed with such precision that they come alive on the page with the action unfolding clearly as you read. Very few first time indie authors are able to pull this off with such flair.

At the heart of the novel, though, is the relationship between Catlow and Pretlow Creedence and their story elevates this tale head and shoulders above the usual Urban Fantasy Swashbuckler (I made that up) fare.

Not for the faint of heart and with no elves in sight, Brotherhood of the Blade is an urban fantasy novel for those who love flashy fight scenes and expertly drawn characters in a multilevel, but straightforward storytelling style.

1. One tip for finishing a book.

Make sure you have a journal with all your notes outlines and character sketches and set yourself a deadline!

2. Is there anything in your book that you were worried your mom might read?

Ha! Just the sex scenes between Carcone and Vivian not exactly family reading…

3. Which character written by another author would you change in some way if given the chance?

Up Coming for SA Cosby: Brotherhood of the Blade: The Covenant

Buy at Amazon here! Brotherhood of the Blade (Volume 1)

The Fade Tales on FB

The Fade Tales on FB